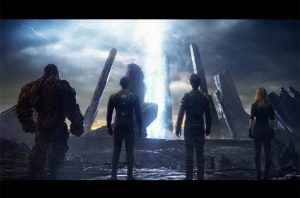 After reading large amounts of negative reviews from the critics and viewers, I was extremely curious to witness the audacity of ‘Fantastic Four’ (2015), brought onto the big screen for the fourth time. What makes it difficult to review this is because ‘Fantastic Four’ (2015) seems like an unfinished film. After an interesting first act, the film feels like large amounts of character development scenes/ action scenes were either cut out, reshot or were never shot entirely. The tone of the film shifts from Sci-fi adventure, to body horror and finally, a hokey super hero film from the 90s (with cringe worthy dialogues like “There is no Victor, only Doom!”). Its truly a shame cause the first act of the film does feel genuinely like it could’ve been a worthy Fantastic Four film and Josh Trank’s vision could’ve been an interesting one to explore even further. Sadly, Fox mendling into the project seems obvious and in the end, nobody won. This is the ugly side of movie making, folks.