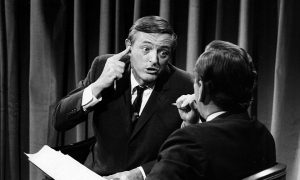 “If you want to stop the Vietnam War, put it on ABC— it’ll be over in 13 weeks.“ Struggling news channel ABC News had nothing to lose but to take a risk. And thus, a political debate show was born between two of the most intellectual yet polar opposite minds of 1968 America; Conservative William F.Buckely Jr vs Liberal Gore Vidal. A program that would change television news forever. Neville and Gordon’s brilliant documentary ‘Best of Enemies’ (2015) not only objectively relives the politically charged atmosphere of the Vietnam war era but succesfully captures the reverberations of two of the most greatest minds that America had to offer on National Television. The insults hurled against one another alone are simply brilliant. Undoubtly one of the best films of the year.