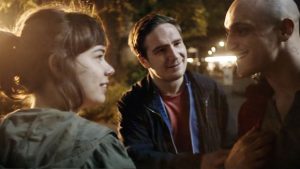 ‘Victoria’ (2015) is an extremely ambitious film. 138 minutes, all in One.Single.Shot. That alone should make one curious enough to watch the film. But apart from the gimmick, does the film holds itself well enough on its own? Yes, it certainly does. While not as heart throbbing or thrilling as one would imagine, the film does has a likeable protagonist who befriends a group of Berliners and ultimately finds herself as an accomplice to a bank heist. This is one german film that deserves international recognition.