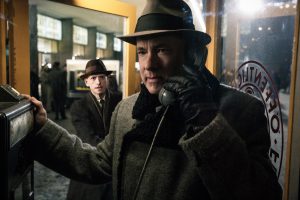 Inspired by the true ‘Gary Powers’ story, ‘Bridge of Spies’ (2015) takes place during the height of cold war paranoia where the old red, white and blue was in the midst of Nuclear War with the Soviet Union and the only solutions for both sides was to infiltrate spies. By this time of his career, Steven Spielberg’s stance on filmmaking is now set in stone and ‘Bridge of Spies’ (2015) is no exception. For better or worse, the film entrails everything that one can love or hate about him. From the two dimensional characterizations to the immpeciable talent in direction, this film has it all. Nonetheless, its an entertaining flick if you’re not really bothered by its hamfisted political overtones.