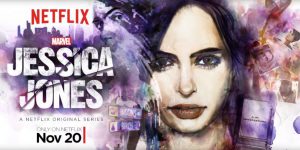 While Disney’s innovations towards the MCU on the big screen has been catered more towards the traditional PG audience, Netflix took the risk of depicting the dark corners of the Marvel Universe. A world full of sexual abuse, violence and relentless brutality and Marvel’s ‘Jessica Jones‘ (2015) thrives in that neon-colored Noir universe. Jessica is certainly a flawed character who suffers from a dark past and lets alcohol get the better of her. Similar to Marvel’s ‘Daredevil‘ TV series, the show is unapologetic towards depicting gore and physical/moral abuse and Krysten Ritter is simply perfect for the lead role. It is a tad bit of a shame that the later episodes suffer from repetitiveness (and the lackluster finale) but the ensemble cast of Tennant and Colter makes the show well worth your time. Netflix/ Marvel collaboration could serve as a few pointers to the DC Universe on how to make a film/ TV show dark in tone without just applying a black filter over it.