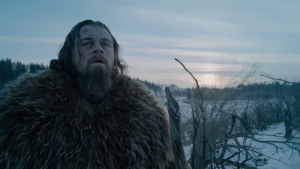 ‘The Revenant’ (2015) takes place in early 19th Century uncharted American wilderness where Hugh Glass (DiCaprio), after a bear attack, is left for dead by his crew and is now out for revenge.
The film reportedly had a very troubled production (over budget, shoot delays) and was unclear how the final film would actually turn out. It is remarkable to say that the film has turned out absolutely fantastic. The visuals by the Cinematographer Lubezki (with just the use of natural lighting) are spectacular and Alejandro González Iñárritu’s is impeccable with his direction skills. DiCaprio and Hardy’s performances bring the grit that suits this story quite well.
Occasionally the story suffers from a few pacing issues but this film is nothing short of being one of Iñárritu’s best works and also one of the best films of 2015.