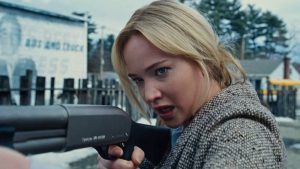 David O. Russell has a fascination with stories out of the ordinary. The outcasts of society who then shed a new light into their personality. With his third collaboration with Jennifer Lawrence and Bradley Cooper, ‘Joy’ (2015) is a rags to riches story of a woman who invents the ‘Miracle Mop’ and with it, a business dynasty.
Unfortunately like the Mop, the only interesting part of the film is when she tries to sell the product on National television. The rest of the film is filled with family feuds and Lawrence’s difficulties of being a single parent (and we’ve seen both these stories countless times before). ‘Joy’ is not a bad film by any means but just incredibly mediocre. And that’s something one might never expect from David O. Russell’s skills as a an interesting storyteller.