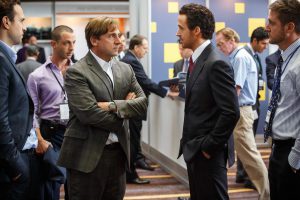 Let me put it this way, ‘The Big Short’ (2015) is the kind of film that would make you climb into the film screen and strangle a few people with your own bare hands. And that’s actually a testament to the film.
‘The Big Short’ is a story that takes place a few years before the big Housing crisis in the U.S. Michael Burry (Christian Bale) discovers that the U.S. housing market is extremely unstable and he can somehow capitalise on the situation by creating a credit default swap market. If this sounds a bit complicated, that’s because it actually is.
This film is a lot of fun though. Gosling, Carell, Bale, Pitt all give captivating performances. Adam McKay, who was previously best known for comedies like ‘Anchorman’ (2004) delivers a fine film with a very complicated subject matter. Its great to see that the film is very self-aware of its topic and decides to present the expository Wall Street mumbo jumbo in the most interesting ways possible.
‘The Big Short’ is an interesting parody of the American Economic infrastructure and the obvious failings of it.