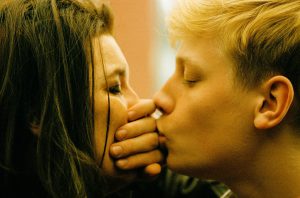 ‘Mommy’ is the fifth film written and directed by the ever talented Québécois filmmaker Xavier Dolan. The film won the Cannes Jury prize in 2014 and received a wide release last year. And yet again, his skills as a storyteller just leave me at loss for words.

Anne Dorval plays the role of Diane Després, a widowed mother who now has to raise her troubled son Steve (Antoine Olivier Pilon) on her own. Along the way, Després is aided by her neighbour Kyla (Suzanne Clément) and together, they all form a special bond.

Shot in rare 1:1 aspect ratio, Mommy projects an interesting ‘personal’ portrait of various actors in their close-up shots, a special feeling that might not have been possible in the regular 16:9 ratio. Dolan’s writing has a special talent of bringing his audience emotionally and uncomfortably close to his characters (who are incredibly flawed), and creates a brilliant mixture of aggression and sorrow between them.

Some scenes from the film (like the characters dancing to a Celine Dion’s French song in the kitchen) are played out with such sensitivity that gives the viewer an interesting private insight into their lives. Dorval and Pilon are simply brilliant together.

With ‘Mommy’ being his new entry in the mother-son anthology, Dolan has cemented his place as one of the upcoming, relentlessly talented filmmakers out there.