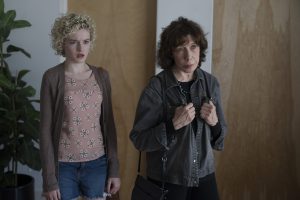 Grandma is a wholesome American story of a young teenage girl who is pregnant and needs to get an abortion before sundown. Since her Mother is not as understanding to this sensitive issue, she turns to her Grandma (Lily Tomlin), a rebellious ex Hippie gay woman from the 70s. And together, they embark on a journey to find cash for the abortion and quite possibly, uncovering some of the secrets from her past.

Grandma is short, sweet, funny and doesn’t waste too much time on exposition. Its also a comedy that just doesnt make light of teen pregnancy and creates comedic set pieces within various situations in the film without compensating on its intelligence.

You may remember Lily Tomlin from ‘I ❤ Huckabees’ (2004), and here, she is absolutely fantastic as the lead role. Several supporting characters also give great performances but it is Sam Elliot, who plays her ex lover, who steals the show.

Paul Weitz (writer/ director of the film) has probably the most varied filmography, ranging from the charming ‘About A Boy’ (2002) to the downright terrible ‘Little Fockers’ (2010) and its great to him go back to his Indie filmmaking roots and write a short, witty script about a Lesbian Grandma and her pregnant teenage grand daughter.

Even though ‘Grandma’ sometimes might try to act a little too clever for its own good, its flaws are overwhelmingly compensated for its witty bander. And within all this barrage of ridiculous Reboots/ Remakes in Hollywood, ‘Grandma’ breathes a much need fresh breath of Indie air into the mix.