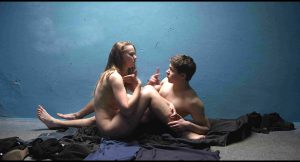 No words, no music, no subtitles.

The Tribe is a Ukrainian film that takes place in a specialized boarding school for the deaf. Sergey, the new student, is quickly inducted into a student gang who partake in crime and prostitution. After a series of horrendous events, Sergey falls in love with one of the student prostitutes and breaks one of the unspoken rules of obeying the hierarchy of the Tribe.

The film is absolutely brutal in its depiction of violence and abuse. Without the use of dialogues or subtitles, the emotions and motivations of the characters appear utterly truthful and in some cases, extremely barbaric. The world that is created within the confines of the Boarding school mirror that of the Stone Age. A time where proper spoken language was not yet developed but the emotions and actions spoke much louder than words. And as Evolution suggests, human species are not meant to live in solitude. They belong in tribes. And to survive, you have to mimic the barbarity yourself or perish.

Miroslav Slaboshpitsky’s The Tribe is brilliant because it understands its limitations to sound and portrays it with various scenes involving long tracking shots, split screens or even ambiance. Each scene begins with the viewer picking up clues as to what the scene could be about and the results are fairly rewarding.

This is one of the best films of the year. The Tribe is an experience you will likely remember long after watching it.