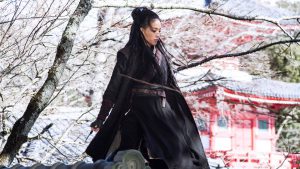 The Assassin is the acclaimed Taiwanese filmmaker Hou Hsiao-hsien’s latest film which takes places in 8th Century China. Qi Shu plays the role of a deadly assassin whose next mission is to eliminate a local ruler who somehow has connections to her mysterious past.

Hou Hsiao-hsien won the Cannes Best Director Prize last year and has made quite interesting character studies in the past (films like The Puppetmaster) but honestly, this film is actually a bit of a conundrum to review and leaves me stranded on the fence.

Even though the shot composition and costume design is beautiful and is quite reminiscent of the Tang Dynasty, it is just not enough to get you invested in its storytelling. Some scenes that are filmed behind a veil of silk are creative and give an intriguing insight to the situation but the characters themselves come off as unsympathetic and ignorable. The film just begs the question; should I admire the beauty of the visuals and be drawn into the almost non-existent pacing of the film?

While it is clearly obvious that Hou Hsiao-hsien’s slow paced storytelling targets a very particular audience, The Assassin just comes off, at times, as tedious and might wander your mind off to the chores that you need to fulfill on your way back home.

It might be possible that the second or third viewing could change my perception about the film but for now, the curiosity for the art behind the filmmaking is just not enough. If you admire the visuals of a film regardless of its lack of a concrete plot or strong characterizations then this film might satisfy your thirst for something new.