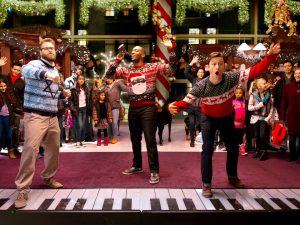 The Night Before is a Christmas comedy that takes place essentially in one single night. Ethan (Joseph Gordon-Levitt), Isaac (Seth Rogen) and Chris (Anthony Mackie) have been friends since childhood and every christmas, they hit the town together till the wee hours of the morning next day. But this christmas, things might just be different as they somehow get invitations to the Nutcracka Ball – the Holy Grail of Christmas parties.
For a christmas night that is supposed to be remembered for ages, nothing really memorable happens and I forgot about this film soon after watching it.
That isn’t meant to say that the film doesnt contain laughs. Seth Rogen and Joseph Gordon Levitt are always great together. But the problem lies in juggling the comedy/ drama aspect of the plot. The film tries to be different than most stoner comedies but at the same time, doesn’t want to meander too far away from the mainstream Hollywood comedy formula (wacky premise. man childs running away from responsibilities but in the end, realising how family is more important than anything).
Unlike ’50/ 50′ (also directed by Jonathan Levine), you never really get invested too much into the characters to feel emotional empathy for them. The film starts off quite strong with real character motivations but within a few scenes, the plot is hijacked by an auto-pilot of Stoner comedy nonsense.
Sure, one can laugh at the wackiness of Seth Rogen high on mushrooms but it gets tiring real fast. The second half of the film tries hard to create jokes through celebrity cameos acting crazy and recycles jokes that we have seen countless times by now. It is now obvious that Stoner comedies really have become stale and utterly predictable at this point.
That isn’t to say the Rogen, Gordon-Levitt and Mackie aren’t funny actors. There just have been much better christmas comedies in the past and The Night Before just doesn’t bring anything new to the genre.