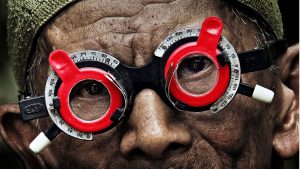 The Look of Silence is a documentary which depicts the remains of the Indonesian genocide that took place in 1965, brutally murdering thousands of communists or anyone who opposed the army regime. Adi Rukun, who plays the brother of a man who was murdered during the genocide, has the unique privilege to confront the masterminds behind the massacre and put his nightmares to rest once and for all.
The Look of Silence is a spiritual sequel to Joshua Oppenheimer’s previous masterwork The Act of Killing (2013), which portrayed the massacre through the perpetrator’s perspective. Honestly, this film is clearly not for the faint-hearted. The confessions that the ex-officers admit to are barbaric and inhumane. What surprises the viewer even more is how ‘drinking the victim’s blood’ was their solution from eternal damnation.
Although the documentary lacks the brutal impact of the first documentary, The Look of Silence can still induce nausea and paranoia of how hopeless humanity is. It’s a tragic study of how foreign interventions from the CIA lead to this relatively unknown genocide that even the Indonesians are hesitant to admit to. The murderers are still celebrated as heroes on national television and like our main protagonist Rukun, we know that justice at this point in history, is utterly impossible.
Director Joshua Oppenheimer is great at enabling his subjects to reveal their darkest desires onscreen, hidden behind the smiles of perhaps some feeling of regret and dissatisfaction. It is a frightening portrayal of ethnic cleansing that should be seen by everyone but is forgotten by none.